At this time last year, I was brimming with excitement knowing the potential this division had to be ultra-competitive. It did not disappoint. It was a playoff field loaded with perennial powers and when the dust settled, we had a first-time state champion crowned in the Kindred Vikings. Now we’ll see if the Vikings can repeat and as you’ll read in my preview below, I certainly think they have the talent returning to do so. 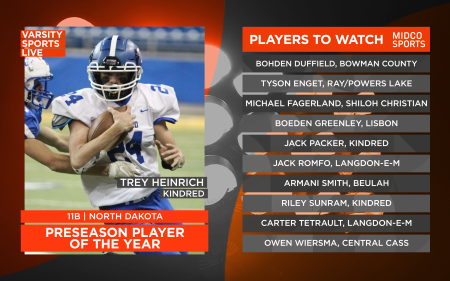 At this time last year, I had the Vikings as my preseason #5 pick. But it’s clear that Matt Crane’s program is transforming into something special and has the potential to be pretty dominant at the 11B level where it is one of the biggest schools. The Vikings left no doubt who the best team was last year by going through some of the best football programs in the state: 30-28 over Thompson, 21-18 over Langdon-E-M, 51-19 over Bowman County and 37-14 over Hillsboro-CV in the Dakota Bowl. Their balanced offensive attack led by the arm of Max McQuillan and legs of Trey Heinrich was tough to stop especially in the championship game when they outgained the Burros 430-106 in yards.

This year’s version of the Vikings will look very similar up front. Head coach Matt Crane says, “Our strength will be our line. On offense, we will return five out of six offensive linemen if you include our tight end.” That offensive line group includes a couple of all-state selections in 6’0” 260 lb senior Jack Packer and 6’4” 245 lb junior Riley Sunram. I caught a glimpse of that group putting in work during the opening week of practice and I’d feel safe saying they’re a top five offensive line group no matter which class you’re talking about. Sunram is becoming a hot commodity on the recruiting trail having picked up offers from Minnesota, NDSU and UND over the summer.

Senior RB Trey Heinrich has the luxury of running behind this group for a third straight season. Heinrich, who played with two torn labrums down the stretch last year still rushed for 1,347 yards and combined for 28 TD, while making 72 tackles and five interceptions on defense. He’ll be a beast to bring down this fall and will help aid in the transition at quarterback from McQuillan to Jorgen Swenson. Swenson can also rely on the experience he gained in starting a few games last season when McQuillan was battling an illness. Five starters return on defense with Sunram and Packer being the bullies on the defensive line. Swenson is back to lead a secondary that collected 25 interceptions a season ago.

After failing to reach the Dakota Bowl for the first time since 2016, the Langdon-Edmore-Munich Cardinals have a little added motivation heading into the 2022 season. The Cardinals were eliminated in the quarterfinal round last year by eventual state champion Kindred in a hard-fought 21-18 loss. But with nine starters returning on each side of the ball this team is poised to make a deep run. Head coach Josh Krivarchka feels confident in his group. “We are excited about the upcoming season. We feel we have some talented players back. The kids have had a great offseason.”

After a strong sophomore season in which he passed for 1,736 yards, 17 TD and 13 INT, Rayce Worley is back to run the offense for the Cardinals. Look for him to make huge strides as a junior especially with how much talent is surrounding him. Leading rusher Carter Tetrault returns for his senior year after piling up 1,151 rush yards, 634 receiving yards and 20 combined TDs last season. Tetrault and receiver Markus Kingzett (40 rec, 734 yds, 10 TD last year) are big-time playmakers for an offense that Coach Krivarchka expects more from. “I feel we will be really good on the defensive side of the football, but for us to take a big step forward we have to be better offensively.” On the defensive side, look for Tetrault, Jack Romfo, Mason Romfo, and Gage Goodman to lead the way again. Jack Romfo was a first team all-state pick last year, while Goodman led the team in interceptions with three.

From one perennial power to another. The Burros have played in four of the last five Dakota Bowls but settled for runner-up honors last year to Kindred in the 37-14 defeat inside the Fargodome. The Burros don’t return nearly as much as the two teams ranked ahead of them on this list. After graduating a large class of 22 seniors, Scott Olsen’s crew has just three starters back on both sides of the ball. They graduated their leading rusher, leading receiver and top two tacklers from a year ago.

Riley Olsen returns to quarterback the team after a junior season in which he passed for over 700 yards and rushed for over 700 yards, piling up a combined 20 TD in the process. I expect senior Cole Hebl to get more carries this year after averaging 7.5 yards per carry last season en route to a 500-yard rushing season with 6 TD. Senior OL/DL Jake Swanson is another player to keep an eye on. He was a second team all-state selection last year and will be a force in the trenches. The Burros will get their chance to prove these rankings wrong throughout the season. They play Kindred on August 26th and Langdon-E-M on September 16th.

The Squirrels opened the year with the biggest of statements on opening night by pummeling Hillsboro-Central Valley 31-12. But when it was all said and done, the Burros got the last laugh ending Central Cass’ season with a 28-6 triumph in the 11B quarterfinal round. Still, it was an impressive season for Central Cass who finished 9-2, the most wins for the program since 1980. Their two losses came courtesy of the teams who clashed in the Dakota Bowl.

Head coach Tommy Butler will look to his six returning starters on offense and five returning starters on defense to lead the way early. Butler is excited about the players up front. “We will look to lean on our offensive and defensive lines this year as we bring back four of the five starting OL and all of our DL starters from last year.” That group will be paving the way once again for returning first team all-state RB Owen Wiersma who’s expected to carry a lot of the load this season. Carter Maasjo and Brayden Mitchell are the contenders to replace 3-year starting QB Brendan Maasjo. The Squirrels will also have to replace the production of leading receiver Jake Deutsch who finished last year with 891 receiving yards and 16 TD. The defense will be anchored by the likes of returning all-state pick Tyler Cruchet, Marcus Biffert, Cooper Johnson, Ryan Stafford among others. The key date on the calendar is September 30th when defending state champ and region rival Kindred comes to town.

Coming off a trip to the state semifinal round, Bishop Ryan is hoping to keep momentum going into 2022. The Lions will have to do so without some of its top skill players from a year ago including Zach Hendrickson. “What we lack in experience and age (only 3 seniors), we will try to make up for in numbers and effort.” Head coach Roger Coleman believes that in terms of roster size and depth that this team has potential to be one of the best he’s had in his six years coaching the program.

There’s a lot to like about the offensive line group which features 6’5” 280 lb junior Coy Okeson who made the all-state team as a sophomore last year. He’s a player that really pops out at you when you watch film for the way he finishes blocks and has the ability to overpower opponents even as an underclassman. The name most familiar with fans who watched Bishop Ryan highlights on Varsity Sports Live last year is quarterback Jett Lundeen who really impressed last year as a freshman. Lundeen passed for nearly 2,000 yards and rushed for 350 yards while combining for 26 TD. Look for inside linebacker Brett McKay to be the heart and soul of the defense. Bishop Ryan gets a huge test on opening night with Langdon-E-M in town on August 19th.

The Bulldogs were a fun group to follow last season. I’d argue they were one of the teams that improved the most from week one to the finish of the season. Now, the question is can they keep the train rolling with not only new players in key spots but a fresh face on the sidelines. Nate Kees replaces former head coach Nick Walker who guided the Bulldogs to the state semifinal round last year.

Here’s an interesting stat. The Aggies haven’t won fewer than seven games in a season since 2014. It’s been an impressive seven-year stretch for Larry Sandy’s program that has had a trio of 10-1 finishes in that span. Last year’s team saw some underclassmen step into key roles and now they’re hoping that experience will lead to more success this fall.

Sophomore Ben Schepp (1,191 pass yds, 11 TD, 8 INT; 538 rush yds, 10 TD last year) returns under center after quarterbacking the team as a freshman. Schepp was also a vital part of the team’s success on defense. Sophomore RB/LB Hank Bodine made the all-state team after a stellar freshman season in which he combined for nearly 500 yards of offense and made 44 solo tackles including 8.5 TFL. Other key returners like senior OL/DL Gabe Lakoduk and senior TE/LB Payton Bodine make this a well-rounded team that should give Bishop Ryan a run for the Region 3 crown.

Bowman County’s region four rival Beulah will be in the mix again this fall, too. After a strong start to the season last year, it was a bitter finish for Beulah. The Miners lost the de facto region championship game to Bowman County 34-8 on the final week of the regular season and then were shutout at home by Velva/Garrison 12-0 in the opening round of the playoffs.

The Miners have some great talent on the line of scrimmage with seniors Armani Smith and Tarren Larson leading the way. Trace Beauchamp will take over the reins at quarterback. There might be some growing pains with this team, but with the style they play I see them being a factor down the stretch. A big key will be to stay healthy because the depth isn’t there like it has been in years past.

Class 11B Preseason Player of the Year