Like every sport, track and field features a specific soundtrack.

The crack of a starter’s pistol... 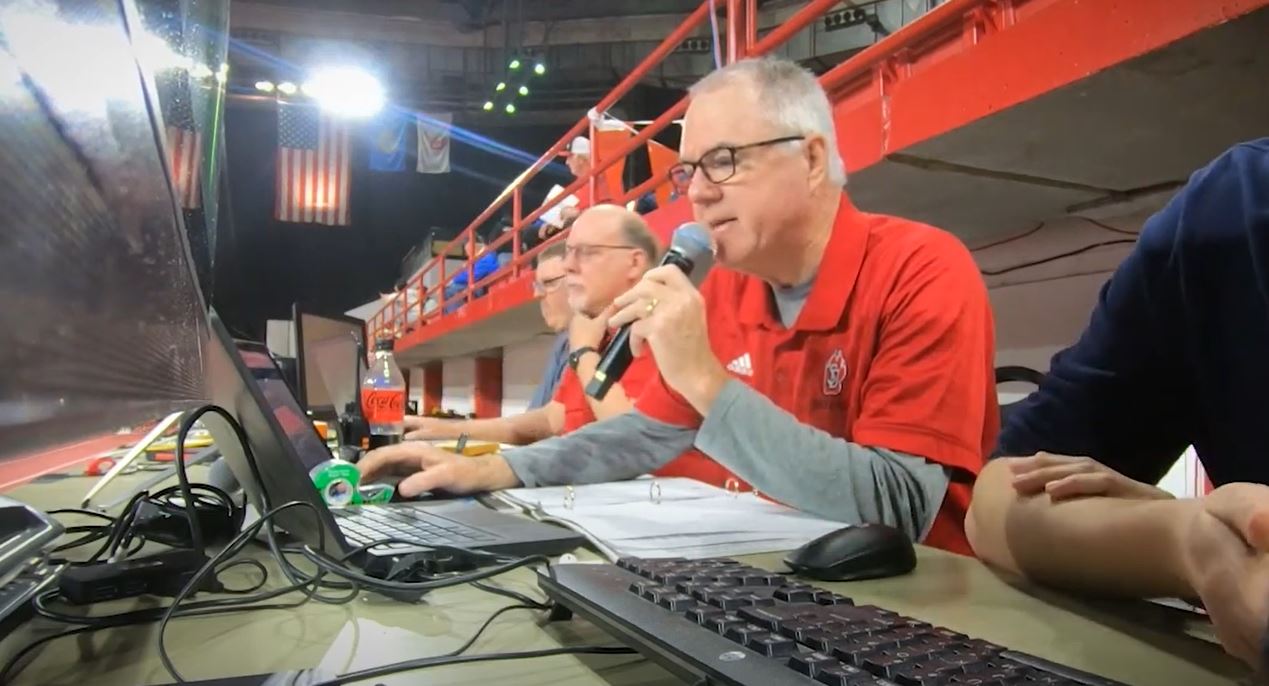 The ring of the bell lap…

And – at the biggest meets in South Dakota for the last three decades – the voice of Greg Merrigan.

Paul Hendry Rapid City Stevens Track and Field: “The enthusiasm and the knowledge he has is just amazing.”

Greg Merrigan: “You go to a basketball game, and it’s a couple hours. A football game’s three hours. They’re quick, they’re exciting. Some track meets can get a little long. So if you can keep the fans interested and make it exciting, that’s gratifying.”

A farm kid from north of Vermillion, Merrigan got his start behind a microphone as a freshman at the University of South Dakota.

Greg: “I was a mass comm major, so…I don’t know why, but it just kind of appealed to me. Guess I liked to talk too much or something…

We were covering a JV football game at the old field, and Ron Lenz was the sports information director, and he said, “We need a public address announcer.” And he turned and looked at me, and I said, ‘Yeah, heck I’ll do it.’”

Greg wouldn’t pursue a career in media after college, but he did continue announcing in stadium for Coyote football, basketball, and his favorite pastime, track and field. In 1995, his profile within that sport started to accelerate when he became the meet announcer for the Howard Wood Dakota Relays and the South Dakota High School State Track and Field Championships.

Greg: “Really fortunate to be in the right place at the right time and pick up the opportunity to broaden things a little bit.”

At a time when most track meets featured minimal interaction over the PA, Greg chose to do the opposite, drawing inspiration from the voice of one of the most prestigious track events in the country, the Drake Relays.

Greg: “There was this guy standing by the track at this little podium, announcing. He was what really caught my ear. His name was Jim Duncan, longtime voice of the Drake Relays, and he would just be throwing out all this trivia, all these tidbits, just really made you identify with the athletes a little bit more. So when I started announcing, that’s the guy I emulated.”

Like Duncan before him, Greg’s trademarks became his enthusiasm and his wealth of knowledge, all backed by extensive research.

Greg: “If there’s anything you hate worse, it’s having a kid put in a great performance, and you miss it, so homework’s important. At Howard Wood and the State Meet, there’s four of us in the press box. Everybody’s feeding information. Everybody’s got notebooks open and computers open.

If a kid works hard and places at two events at the state meet, hey, the fans in the stands should know that. It was fun to give those kids recognition, and yeah, it definitely got some feedback from some people about it, so that was gratifying. They weren’t just tired of us talking too much up in the press box.”

Over the years, Merrigan has added other announcing duties to his annual schedule, including state and regional cross county meets and collegiate conference and national championships. He’s become the narrator – and often, the catalyst – for many of the greatest moments in South Dakota track history.

Greg: “A while ago, I looked through the South Dakota top ten list, and I was just looking at all the different kids I had a chance to announce…You kind of take it for granted. We have pretty good track and field in this state.”

After 43 years of PA work, Greg’s now entering the home stretch of his announcing career, with plans to step back after the 2023 track season.

Greg: “I could see maybe one more year of doing what I’m doing, and then the year after that, kinda…shutting it down a little bit.”

So with that in mind, if you make it to Howard Wood Field this spring or next, be a little extra thankful for the voice you hear over the loudspeaker, the legendary soundtrack for a sport deserving of the recognition Greg Merrigan continues to provide.

Greg: “If you see a kid coming around the home stretch and they’ve got a chance at a record, if you can get the crowd engaged in that to cheer them on, that’s very gratifying to be part of that.”