We’re less than a week away from the 97th running of the Howard Wood Dakota Relays in Sioux Falls, a two-day event that always ranks as one of the top high school track and field meets anywhere in the United States.

While over 3000 student athletes will compete at the Wood this weekend, there are 18 elite runners who’ve earned a special place in the spotlight, as they’ll comprise the fields for the Relays’ annual high school special events. 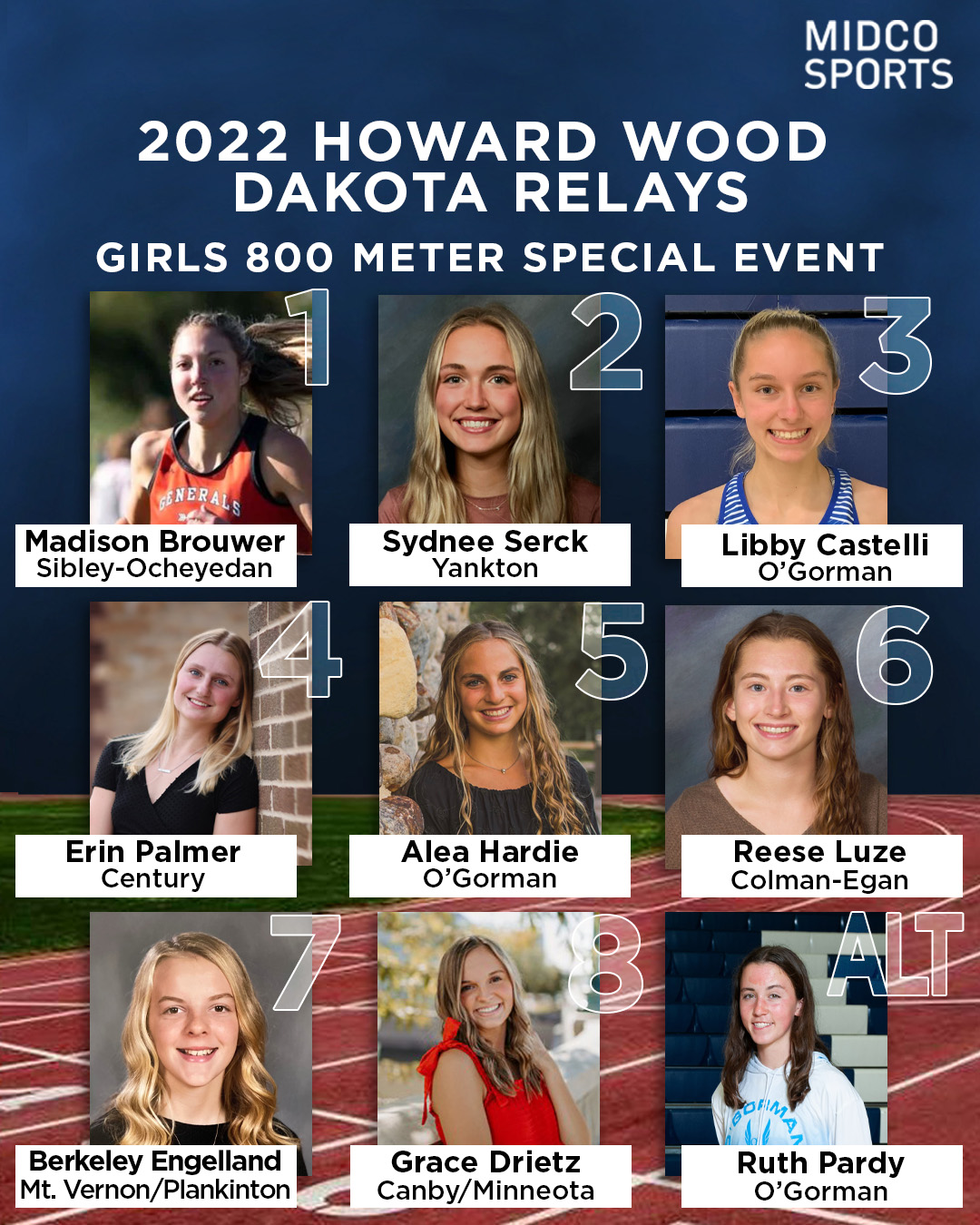 Set to take place under the lights on Friday, May 6, at 6:35pm and 7pm, this pair of invitation-only races annually brings in the best of the best from around the Upper Midwest, and this year is no exception.

The details on the Boys Special 200m field will be revealed tomorrow on MidcoSports.com, but today, the focus is squarely on the young women running in the Girls Special 800m, a collection of reigning state title winners and school record holders from the Dakotas, Iowa, and Minnesota.

Starting in lane oneis MADISON BROUWER, a junior from Sibley-Ocheyedan High School. Madison is the first of six former 800-meter state champions in our field after she captured the half title in Iowa’s Class 2A in 2021. A versatile athlete, Brouwer is the General’s school record holder in the 800m but also placed fourth at state in the 400m last spring, was the 2A runner-up in cross country this past fall, and was a 1st Team all-state selection in basketball this winter. She’s also a National Honor Society member. Madison is the daughter of Jerrod and Tracee Brouwer, and she’s coached by Lisa Block.

Starting in lane two is SYDNEE SERCK, a junior from Yankton High School. A state track medalist since she was in 7th grade, Sydnee had an outstanding state meet a year ago, finishing 4th in Class AA in the open 800m, second in the 4x8, and first in the 4x4 with an all-class gold medal clocking. A school record holder in three events, Serck is currently ranked 3rd in the half among all classes in South Dakota. She’s also an all-conference cross country runner, an All-State Choir selection, a National Honor Society member, and a 4.0 student. Sydnee is the daughter of Luke and Stephanie Serck, and she’s coached by Luke Youmans.

Starting in lane three is LIBBY CASTELLI, a freshman from O’Gorman High School in Sioux Falls. One of the rising distance stars in South Dakota, Libby placed top-five in AA in three individual events as an eighth grader at last year’s state track meet, including a pair of runner-up finishes in the 800m and 3200m which helped secure the Knights’ first ever girls state track team championship. A three-sport athlete, Castelli helped O’G win another team title this fall at the state cross country meet with a third-place finish, one week after she’d earned 1st Team all-state honors in soccer. Libby is currently the top-ranked two-miler in South Dakota and ranks 2nd in the 1600m and 800m. She’s the daughter of Pete and Jenny Castelli, and she’s coached by Aaron Strand.

Starting in lane four is ERIN PALMER, a senior from Century High School in Bismarck. The last time the Dakota Relays Girls Special 800m was held, Erin ran a 2:13.33 to claim the title as a freshman in 2019. Since then, she’s gone on to win six North Dakota Class A state championships, including individual crowns in the 400m and 800m, two events that she’s currently top-ranked in North Dakota in. A three-time all-state cross country runner and her class’s valedictorian, Palmer is also an All-American swimmer and will compete in both track and field and swimming this fall in the Pac-12 at the University of Utah. Erin is the daughter of Randy and Mary Palmer, and she’s coached by Teresa Hanson and Brennan Doan.

Starting in lane five is ALEA HARDIE, a senior from O’Gorman High School. Our second O’Gorman Knight in this year’s field, Alea is on pace to finish her prep career as one of the most decorated distance runners in South Dakota history. Featuring both speed and stamina, Hardie has captured back-to-back 800m and 1600m AA championships on the track while claiming three consecutive state cross country titles. She’s currently ranked first in South Dakota in the half and the mile, while her 1600m PR from earlier this spring of 4:53.11 ranks second all-time in the Rushmore State. Alea will take her talents to Lincoln this fall to run at the University of Nebraska. She’s the daughter of Mark and Sara Hardie, and she’s coached by Aaron Strand.

Starting in lane six is REESE LUZE, a junior from Colman-Egan High School. The defending Class B 800-meter champion in South Dakota, Reese placed top three in four different events at the 2021 state meet to help lift the C-E Hawks to the program’s first girls track team championship. A runner with a variety of talents, Luze is the school record holder in the 800m, the 1600m, and the 3200m, and she currently leads Class B in the quarter and the half while ranking 4th in the 200. A three-sport athlete, she’s a three-time placer at the state cross country meet, a National Honor Society member, and also a 4.1 student. Reese is the daughter of Rick and Brittney Luze, and she’s coached by Julie Preheim.

Starting in lane seven is BERKELEY ENGELLAND, a sophomore from Mt. Vernon/Plankinton. As a freshman last spring, Berkely went undefeated at the 2021 South Dakota State Track Championships, winning the 400m and 800m and anchoring two Titans relay teams to titles. A three-time Howard Wood relay champ, few in the state are more versatile than Engelland, who currently ranks top-four in Class A in the 100m, the 200m, the 400m, and the 800m. Berkeley also plays volleyball and basketball and is the daughter of Craig and Kelly Engelland. She’s coached by Lawron Bohr.

Starting in lane eightis GRACE DRIETZ, a senior from Canby/Minneota High School. Our lone Minnesotan in the field staked her claim as one of that state’s top mid-distance runners after winning Class A titles in the 800m and 1600m last spring. Drietz has seven individual podium finishes at the state track meet in her career and has been top 20 three separate times at state cross country. A standout in the classroom as well, Grace has served as National Honor Society president and class president and will continue her education and running career this fall at South Dakota State. Grace is the daughter of John and Amy Drietz, and she’s coached by Tony Ourada and Sara Hemish.

This year’s alternate is RUTH PARDY, a sophomore from O’Gorman High School. One of the unsung heroes on the Knights’ distance team, Ruth has been integral to O’G’s team success on the track and cross country course in recent seasons. Pardy placed top-six in three individual events at last spring’s state meet and was fourth at the AA cross country meet this fall. A two-time state champion swimmer, Ruth is also an outstanding triathlete and finished second in the 2021 Youth and Junior National Triathlon Championships. Ruth is the daughter of Matthew and Paula Pardy, and she’s coached by Aaron Strand.

The event will begin Friday, May 6, at 6:35pm CT from Howard Wood Field, and if you can’t make it in person, you can watch this race and much more live on Midco Sports and streaming on Midco Sports Plus! Our two-day coverage of the Dakota Relays begins Friday at 6pm and continues Saturday at 1pm.