The 2021 high school volleyball season is in the books and congratulations to all the teams, especially the state champions from Bismarck Century and Linton-HMB! This year, we decided to put a bow on the season by recognizing some of the top players in each class sponsored by North Dakota Farmers Union Insurance. We emailed all the coaches across the state to get nominations. We compiled that information and then had the difficult task of narrowing the list down to our two player of the year finalists and honorable mentions for each class. If you don’t see a player that’s worthy of being mentioned, please reach out and submit their name/school and stats. I’ll do my best to add them. Email jody.norstedt@midco.com. We apologize in advance because it’s inevitable that some worthy individuals will get missed for a variety of reasons. Also, some of the stats below won’t be 100% accurate because they were gathered at various times during the postseason. Thank you for taking the time to check out this blog and congrats to every player across North Dakota because we know the season requires a lot of hard work, sacrifice and commitment! 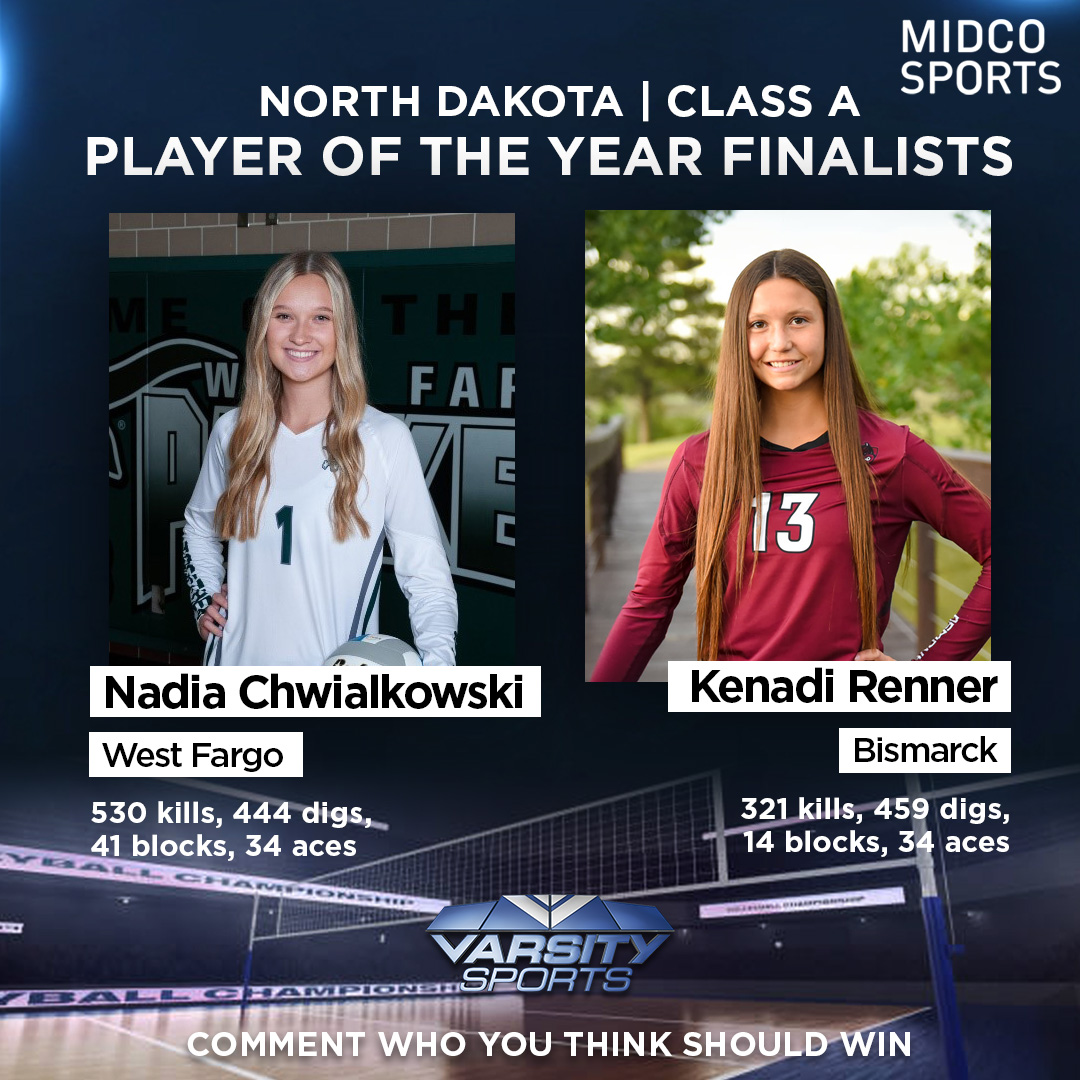 Player of the Year Finalists

Chwialkowski capped off a decorated career by helping lead the Packers to a 3rd place finish at the state tournament. The 2021 EDC Outstanding senior athlete of the year was dominant at the net boasting a 36.0% kill percentage. She’s a 6-rotation player for the Packers and has been a starter since she was a freshman for Kelsey Gibbons’ team. Coach Gibbons says, “Nadia is an outstanding leader on and off the court, and one of the best teammates I’ve ever had the opportunity to coach.” Chwialkowski will play division one volleyball next season at Texas A&M Corpus Christi.

Renner led the Demons to a runner-up finish at the state tournament by being a consistent force in all aspects of the game for Bismarck High. The senior has been a 6-rotation player each of the last two seasons for Brianna Kline’s program. In the state tournament, Renner led the Demons in kills with a total of 35 in the three matches. She’s among the leaders in both kills and digs in the WDA. Coach Kline says “She was extremely consistent this season and could place a ball wherever she wanted and mix up her shots.” Renner and Mia Hinsz, who was selected as WDA senior athlete of the year, were an excellent leadership duo that helped spark the Demons to their best finish at state since 2016. 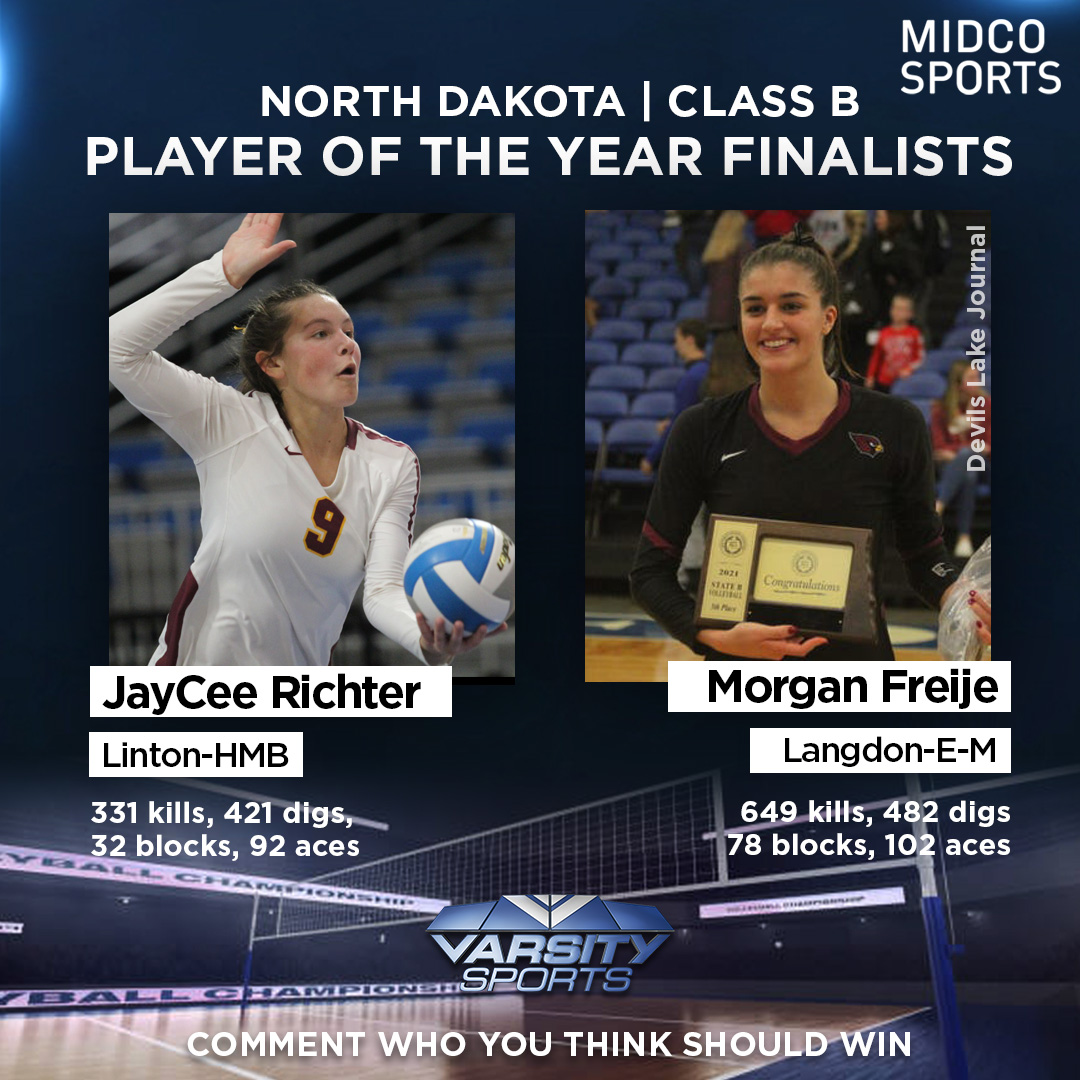 Player of the Year Finalists

Freije has been pegged as one of the top players in the state ever since her breakout sophomore season in which she helped lead Langdon-Edmore-Munich to the state championship. In her 5th year of playing varsity, Freije recorded a whopping 649 kills. An injury to teammate and standout hitter Cora Badding, put more on the senior’s shoulders and she continued to deliver leading the Cardinals to a 5th place finish at state. Freije put up massive kill numbers on the biggest stage, recording kill totals of 18, 25 and 26 in the three matches at state. Head coach Rich Olson knows her presence will be missed, “Her leadership has helped elevate others around her.”

Richter wrapped up a phenomenal senior season by helping the Lions win their second consecutive state championship. The Class B senior athlete of the year topped 300 kills, 400 digs and 90 kills this season. She’s been a starter for five seasons for the Lions and can play any position on the court. Her mom and head coach Jaime Richter describes her this way, “JayCee can take over the game just on her serving. She developed her hitting and blocking game this year, which makes her stronger than ever.”